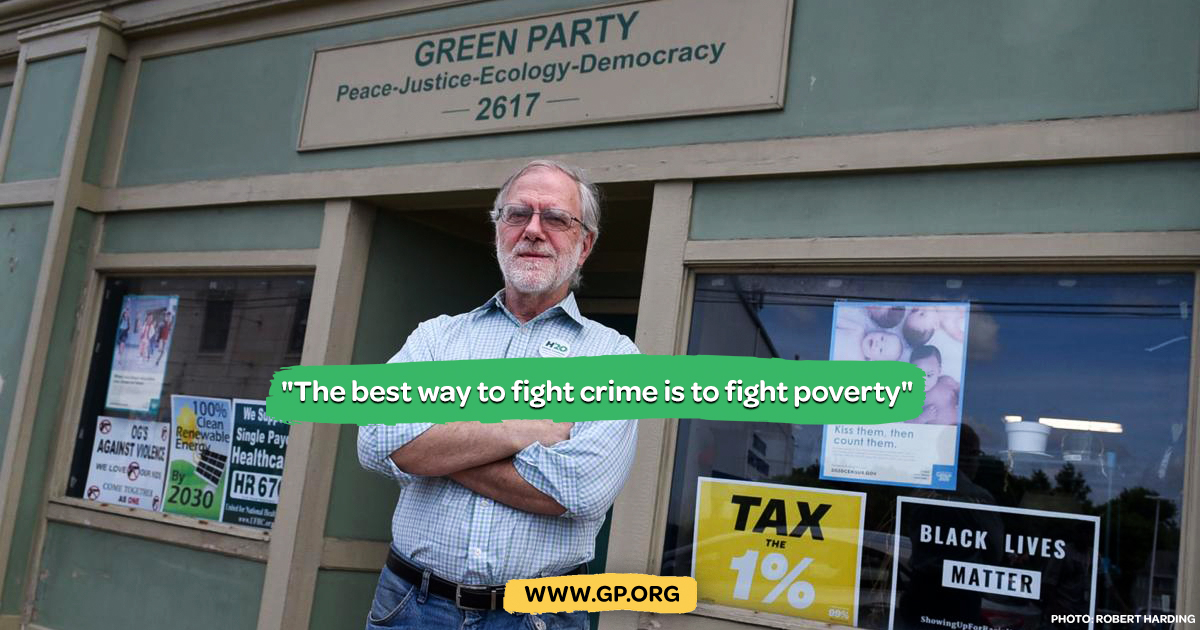 Learn more about the campaign

Howie Hawkins is humbled. This was a possibility when he launched his campaign in April 2019, but he had to win the support of voters in the party he co-founded.

On Saturday, Hawkins officially became the Green Party’s nominee for president. He received 210 of the 355 votes on the first ballot to win the nomination at the party’s convention, which was held online due to the COVID-19 pandemic.

The presidential bid is the culmination of a lifetime of activism and nearly two dozen political campaigns. Hawkins, a retired UPS employee and Teamster who lives in Syracuse, was asked to run for president eight years ago. He declined because of his work obligations.

It would be easy to dismiss this 67-year-old who has been a candidate for various federal, state and local offices over the last three decades. As the Green Party nominee, Hawkins knows what he’s up against. He hopes, though, to change the narrative — to force Republican President Donald Trump and Democratic nominee Joe Biden to discuss the Green Party’s issues.

A leftist in a GOP family

Hawkins was born in San Francisco and raised by a Republican family. As he became more interested in politics and policy, he began to ask himself a question: “Where’s my party?”

He recalled cousins who were told they would have to attend segregated schools because their mother was Japanese. He had other cousins, who were white, and they attended white-only schools.”That early I knew that that was wrong and it just bugged,” Hawkins said in an interview.

As an elementary school student, he remembers the “duck-and-cover” drills during the Cold War. Even at a young age, he knew that diving under desks and covering his head wouldn’t shield him from the disastrous effects of a nuclear attack.

Racism and the threat of nuclear war were personal, Hawkins says. But, he added, he grew up during the 1960s in the San Francisco Bay Area.

“There was a lot going on,” he said. “And if you were following the news and were concerned about these things, it was hard not to get drawn into it.”An important year in Hawkins’ development was 1964. As a 12-year-old, he watched as Ronald Reagan, who would later become governor of California and a two-term president, opposed a fair housing law in California. Republicans his family supported successfully advocated for the repeal of the law.

Hawkins wasn’t going to join the Republican Party after that moment. He looked to the Democratic Party, but they had refused to allow a group of Black Democrats from Mississippi to be seated at the party’s convention in 1964.

After the events of that year, Hawkins found his home with leftist movements and political parties, the first of which was the Peace and Freedom Party in 1968.

“Even though I could vote for it (he was 16 at the time), I was rooting for it and telling adults and bugging them to vote for it,” he said.

As a high school student, he attended demonstrations at the University of California, Berkeley, and at San Francisco State. He viewed his role as a foot soldier at these gatherings. But when attendance started to decline in the ’70s, he was asked to increase his participation.

“That’s how I became more of an activist,” he said.

From Clamshell Alliance to founding the Green Party

As a young man in the 1970s, there was a possibility Hawkins could’ve been drafted to serve in the Vietnam War. In June 1972, his draft number came up.

Hawkins said he had already arranged with the U.S. Marine Corps that he would enlist in the officer program. If he completed the necessary training, he would become a second lieutenant. But he didn’t have the money to finish school, so he didn’t become an officer. He told the Marines he would have to fulfill his duty as a “regular enlisted guy.”

While Hawkins waited for the Marines to call him up to active duty — a call that never came — he worked in construction and continued to be active in political movements. He co-founded the Clamshell Alliance, an anti-nuclear group best known for its opposition to the construction of Seabrook Nuclear Power Plant in New Hampshire.

Paul Gunter, another of the Clamshell Alliance’s co-founders, said Hawkins was the group’s spokesperson and often participated in nonviolent civil disobedience.

“I found Howie very early on in the ’70s into the ’80s as an articulate advocate for renewable energy, which was just a nascent technology at the time,” said Gunter, who is now the director of the Reactor Oversight Project at Beyond Nuclear. “But he showed himself to be a visionary for solar and wind efficiency and conservation.”

His involvement in movement politics and leftist parties led him to a meeting in 1984. At the meeting, which was held in St. Paul, Minnesota, the first Green Party organization in the U.S. was founded.

Hawkins said his message to the meeting’s attendees was that the party should be built at the lowest levels of politics by supporting candidates for local government offices. After working to grow the party, the Greens backed Ralph Nader for president in 1996. Nader appeared on the ballot in more than 30 states. When Nader ran again in 2000, he appeared on more than 40 state ballots.

It was in the 1990s that Hawkins also ran as a Green Party candidate. His first campaign was for a Syracuse Common Council seat in 1993. He received 1.5% of the vote.

“Over time, we built up a base of support in the city,” he said.

Mark Dunlea, a longtime member of the Green Party who is one of the state party’s co-founders in New York, recalls contacting Hawkins in 1988 about getting the Green Party involved in presidential campaigns. But it was in the 1990s, when Hawkins moved to New York, that he and Dunlea began working together.

In 2018, Hawkins and Dunlea appeared on the general election ballot in New York. Hawkins was the Green Party’s gubernatorial nominee. Dunlea ran for state comptroller.

Before 2020, one of the few offices Hawkins hadn’t sought was the presidency. He told The Citizen in April 2019 that he was asked to run in 2012, but declined because he was still employed at UPS.

Seven years later, when he was approached again about running for president in the 2020 election, he launched an exploratory committee and then formally declared his candidacy.

As the Green Party’s presidential nominee, one of Hawkins’ main goals is to appear on the general election ballot in every state and the District of Columbia. That’s important, he explained, because it could give the Green Party ballot access for future elections.

So far, Hawkins and his running mate, Angela Walker, are on the ballot in nearly 30 states. He admitted it has been challenging because of the COVID-19 pandemic. While some states eased their rules for securing a spot on the ballot, others did not.

Hawkins also wants to highlight the Green Party’s platform. A key plank is what he described as a “full-strength” Green New Deal. He was the first candidate to campaign on the Green New Deal when he was a gubernatorial candidate in 2010.

The Green New Deal, according to Hawkins, should aim to get the U.S. to zero negative greenhouse emissions and 100% clean energy by 2030. That would require a significant investment — $27.5 trillion over 10 years, he said. The funds would be used to help the energy, manufacturing and transportation sectors transition to clean energy.

He has been critical of the Democrats’ Green New Deal proposal because it doesn’t include a ban on hydraulic fracturing and allows for new fossil fuel infrastructure.

“We said we need cuts in the military budget to help fund this Green New Deal and (Democrats) extended the deadline for zero emissions from 2030 to 2050,” Hawkins said. “And when you give politicians a couple of decades, they’re going to wait a couple of decades.”

An economic bill of rights is also part of Hawkins’ platform. He supports a jobs guarantee, which would be largely funded by the federal government. It would be modeled after the Works Progress Administration established by President Franklin D. Roosevelt during the Great Depression.

The jobs guarantee, according to Hawkins, would provide employment to everyone who is willing and able to work.

He also supports a $20 minimum wage that would be indexed to the cost of living and productivity and a guaranteed income above poverty, which is a proposal that Dr. Martin Luther King, Jr. advocated for during the Poor People’s Campaign.

“If you’re below the poverty line, the government sends you checks to bring you up to above poverty,” Hawkins said.

His platform includes a plan to build 25 million public housing units, a Medicare-for-all system, tuition-free schooling from pre-kindergarten through college and he wants to double Social Security benefits.

Hawkins supports defunding police departments and reallocating those funds to social services that are better equipped at responding to drug addiction, homelessness and mental health crises. But he doesn’t believe cutting funding for police departments is enough. He wants to defund the military and shift those funds to U.S. cities through a Marshall-style plan that would focus on businesses, health care, housing, jobs and schools.

“The best way to fight crime,” Hawkins said, “is to fight poverty.”

Police departments would continue to exist under Hawkins’ plan, but oversight of the agencies would be done by community groups comprised of either elected members or people selected at random to serve, similar to a jury. These organizations would oversee the hiring and firing of police chiefs and address misconduct within the departments.

To address systemic racism, one policy Hawkins endorses is studying reparations for Black Americans. He supports legislation introduced in Congress that would examine how to pay reparations for slavery.

Hawkins hopes that his platform will receive national attention. He believes the most difficult task Green candidates face is having their issues discussed during the presidential debates. Because of the eligibility standards for the debates, Greens tend to be shut out of the debates in favor of the two major party candidates.